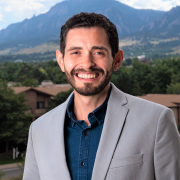 Dr. Brian Aguado (Twitter: @BrianAguado) is currently a rising Assistant Professor of Bioengineering at UC San Diego. He is currently finishing his postdoctoral fellowship at the University of Colorado Boulder, where he has received postdoctoral awards from the NIH and Burroughs Wellcome Fund to support his research in developing precision biomaterials for applications in personalized medicine. Dr. Aguado completed his BS degree in Biomechanical Engineering from Stanford University, and completed his MS and PhD degrees in Biomedical Engineering from Northwestern University. He also obtained his certificate in Management for Scientists and Engineers from the Kellogg School of Management at Northwestern. Dr. Aguado is also a dedicated science communicator outside of the lab and seeks to engage underrepresented populations in the sciences. Most recently, he co-founded LatinXinBME (Twitter: @LatinXinBME), a social media initiative dedicated to building a diverse and inclusive community of Latinx biomedical engineers and scientists to support each other personally and professionally through their careers.   For his efforts, he was named one of the 100 Most Inspiring Latinx Scientists in America by Cell Press.