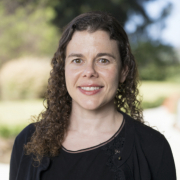 Dr. Christman is a Professor in the Department of Bioengineering and the Associate Dean for Faculty Affairs and Welfare in the Jacobs School of Engineering at UC San Diego.  She received her B.S. in Biomedical Engineering from Northwestern University in 2000 and her Ph.D. from the University of California San Francisco and Berkeley Joint Bioengineering Graduate Group in 2003, where she examined in situ approaches to myocardial tissue engineering.  She was also a NIH postdoctoral fellow at the University of California, Los Angeles in the fields of polymer chemistry and nanotechnology.  Dr. Christman joined the Department of Bioengineering in 2007 and is a member of the Institute of Engineering in Medicine at the University of California, San Diego.  Her lab, which is housed in the Sanford Consortium for Regenerative Medicine, focuses on developing novel biomaterials for tissue engineering and regenerative medicine applications, and has a strong translational focus with the main goal of developing minimally invasive therapies for cardiovascular disease and women’s health.  Dr. Christman is a fellow of the American Heart Association, the American Institute for Medical and Biological Engineering and the Biomedical Engineering Society, and has received several awards including the NIH Director’s New Innovator and Transformative Research Awards, the Wallace H. Coulter Foundation Early Career Translational Research Award, the American Heart Association Western States Innovative Sciences Award, and the Tissue Engineering and Regenerative Medicine Society’s Young Investigator and Senior Scientist Awards.  Dr. Christman is also co-founder of Ventrix, Inc. and Karios Technologies, Inc.