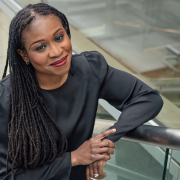 Dr. Omolola (Lola) Eniola-Adefeso is the University Diversity and Social Transformation Professor of Chemical Engineering and Biomedical Engineering at the University of Michigan-Ann Arbor (UM); Associate Director of the Cellular Biotechnology Training Program; and Vice-Chair for Graduate Studies in Chemical Engineering. She graduated from the University of Maryland Baltimore County (UMBC) with a bachelor’s in Chemical and Biomolecular Engineering.  She earned her master’s (2000) and doctoral degree (2004) in Chemical and Biomolecular Engineering at the University of Pennsylvania. Eniola-Adefeso's research interest in the design and evaluation of particulate carriers has contributed significantly to advancing the field of vascular-targeted drug delivery, which is applicable in various diseases, including cancer and heart and lung diseases. Recent discoveries from her lab led to two US patent filings, one of which was recently licensed to Orange Grove Bio, which formed a startup with Dr. Eniola-Adefeso as the CSO.  In recognition of her pioneering research, she has received numerous research awards, including the NSF CAREER award, Lloyd Ferguson Young Investigator Award, American Heart Association Innovator Award, and the BMES MIDCAREER Award. She is a Fellow of the American Institute for Medical and Biological Engineers (AIMBE) and Biomedical Engineering Society (BMES) and is appointed to the NIH BTSS study section. Dr. Eniola-Adefeso currently serves on the UM’s CoE executive committee (Elected), Biosciences Initiative Coordinating Committee (BICC), and Provost’s Academic Affairs Advisory Committee. She is currently a Deputy Editor for Science Advances and on the board of directors for BMES. Her research is currently funded by multiple grants from the NIH National Heart, Lung and Blood Institute, AHA, and the National Science Foundation.