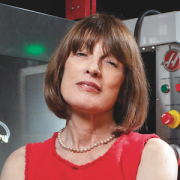 Gordana Vunjak-Novakovic is a bioengineer appointed University Professor, the highest academic rank at Columbia University reserved for only a few active professors out of 4,000, as the first engineer in the history of Columbia to receive this highest distinction. The focus of her lab is on engineering functional human tissues for use in regenerative medicine and patient-specific “organs-on-a-chip” for studies of human physiology in health and disease. Their work is broadly published and highly cited. She has had over 150 trainees, many of which are now holding faculty and executive positions all around the world. With her students, she founded four biotech companies: epiBone (epibone.com), Tara (tarabiosystems.com), Xylyx (xylyxbio.com), and Immplacate (immplacatehealth.com).

Gordana is serving on the Council of the National Institute for Biomedical Imaging and Bioengineering (NIBIB), the HHMI Scientific Review Board and on numerous Editorial Boards and Scientific Advisory Boards and Boards of Directors. She was inducted into the Women in Technology International Hall of Fame "for developing biological substitutes to restore, maintain or improve tissue function", received numerous awards, including the Clemson Award of the Biomaterials Society, Pritzker Award of the Biomedical Engineering Society, Shu Chien Award of the AIChE, and was elected Fellow of several professional societies.