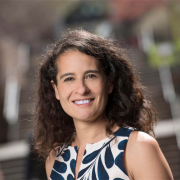 Tatiana Segura, Professor of Biomedical Engineering, Neurology and Dermatology at Duke University. She received her BS degree in Bioengineering from the University of California Berkeley and her doctorate in Chemical Engineering from Northwestern University working with Lonnie Shea. She joined Jeffrey A. Hubbell’s laboratory for her postdoctoral work. In 2006 she joined the Chemical and Biomolecular Engineering Department at University of California Los Angeles as a tenure track Assistant Professor, a position she secured in 2004 before begining her postdoctoral appointment. In 2012 she received tenure and was promoted to Associate Professor. In 2016 she was promoted to the title of Professor.  She joined the Duke faculty in 2018. Segura has received numerous awards and distinctions during her career, including the 2020 Acta Biomaterialia Silver Medal, a CAREER Award from the National Science Foundation, an Outstanding Young Investigator Award from the American Society of Gene and Cell Therapy and a National Scientist Development Grant from the American Heart Association. She was also named a Fellow of the American Institute for Medical and Biological Engineers (AIMBE) in 2017. Prof. Segura has published over 100 peer reviewed papers and reviews and has over 7,000 citations. Her laboratory has been continuously funded since 2008 with several grants from the National Institutes of Health (NIH). She currently serves as a permanent member of the Gene and Drug Delivery Study section at NIH.